How To Use This Safe Link Converter On Your Blog

Casafelink V4 is a premium Safelink with Bootstrap. It can be yours right now, simply order the template on contact form

Home  Jobs in Telangana HIGH COURT OF JUDICATURE AT HYDERABAD

HIGH COURT OF JUDICATURE AT HYDERABAD

HIGH COURT OF JUDICATURE AT HYDERABAD

For appointment to the posts of Civil Judge (Junior Division)

NOTE: THIS NOTIFICATION IS ISSUED FOR 53 VACANCIES IN THE CADRE OF CIVIL JUDGES (JUNIOR DIVISION) ( 43 UNDER DIRECT RECRUITMENT AND 10 UNDER RECRUITMENT BY TRANSFER). HOWEVER, THIS NOTIFICATION IS ISSUED FOR BOTH THE STATES OF ANDHRA PRADESH AND TELANGANA AS THE STATE JUDICIARY IS NOT BIFURCATED. THE VACANCIES NOTIFIED NOW WILL BE APPORTIONED IN BETWEEN THE TWO NEW STATES AS PER THE DECISION OF THE HIGH COURT AT THE APPROPRIATE TIME AND SUBJECT TO PROVISIONS OF A.P. REORGANISATION ACT, 2014.

1) The recruitment shall be subject to the Rule of reservation in favour of candidates belonging to S.C., S.T., B.C., Women and Physically Handicapped{Orthopaedically Handicapped(lower portion of the body)} as per Rule 7 of the A.P.State Judicial Service Rules, 2007. The reservation in respect of BC-E category shall be subject to the result of Civil Appeal Nos. 2628-2637 of 2010, on the file of the Hon'ble Supreme Court of India.

2) The High Court reserves the right, either to increase or decrease the number of vacancies after issuance of the notification, if the situation warrants.

Only those candidates who possessthe qualifications prescribed under A.P. State Judicial Service Rules, 2007 and the qualifications as indicated below, as on the last date, stipulated for submission of applications, shall be eligible to apply.

Must possess a Bachelor's Degree in Law, awarded by any

University established by Law in India.

B. RECRUITMENT BY TRANSFER:

Must possess a Bachelor's Degree in Law awarded by any University established by Law in India. Confirmed members or approved probationers in the categories named hereunder are eligible to apply for the vacanciesearmarked for Recruitment by Transfer.

iv)Section Officers in the Law Department of Secretariates of the State of Telangana and the State of Andhra Pradesh;

v) Section Officers in the Legislature Departments of the State of

Telangana and the State of Andhra Pradesh; and

vi) Managers of the Offices of the Advocate General; Government Pleaders,Public Prosecutors, Editor, I.L. R. of the State of Telangana and the State of Andhra Pradesh;

Provided that no person shall be eligible for appointment to the post of Civil Judge, if

(i) he/she is not a citizen of India;

(ii) he/she was dismissed from any public service;

(iii) he/she has been convicted or arrested in connection with an offence involving moral turpitude;

(iv) he/she has been debarred or disqualified in the selection processfor any post in public service;

(vi) he/she is not of sound health and active habits; (vii) he has more than one living wife; and

(viii) being woman, she marries a person knowing that he is having a wife.

Recruitment by Transfer shall be-

" A person who is maintaining good character and conduct".

i) An applicant shall be a person who has not completed the age of 35 years as on 1-2-2016 for Direct Recruitment.

Provided that the upper age limit of 35 (thirty five) years is relaxable by five years in respect of the persons belonging to ScheduledCastes, ScheduledTribes and Backward Classes.

Provided further that the upper age limit of 35 years is relaxable by 10 years in respect of Physically Handicapped persons [Orthopaedically Handicapped)(Lower portion of the body]. As per Rule 7 of the A.P.State Judicial Service Rules,

(Lower portion of the body] persons alone shall be entitled to apply.

Provided further that in the case of an applicant who served in the defence services of the Indian Union and who is otherwise qualified and suitable, the period of service rendered by him in the defence service, shall be excluded in computing the age, for appointment by direct recruitment.

ii) An applicant for Recruitment by Transfer shall be a person who has not completed the age of 48 years as on 1-2-2016.

V. SCHEME OF EXAMINATION AND SYLLABUS:

The process of selection shall comprise of,

a) Screening Test, which is objective in form; (if the number of

Candidates who are qualified in the Screening Test, if held, shall be short-listed to the level of 1: 10, of the available vacancies in each category, in the order of merit, conferring eligibility upon them, to appear in the written examination. The marksobtainedin the screeningtest shall not be added to the marks obtained in the written examination and they shall not be countedfor determiningfinal order of the merit of the candidates,as the screening test is conductedfor the purposeof short listingthe candidates.

The Questions in the examinations shall be answered only in English.

In the selection process, the proficiency and knowledge of applicants in,

In the Viva Voce, the academic knowledge of a candidate, his/her communication skills, his/her tact and ability to handle various situations in the Court, will be tested.

a) Only such candidates who secure 40°/o -rnarks (for OC category),

35°/o (for BC category), and 30°/o (for SC and ST categories), in case of direct recruitment, shall be treated as qualified in the written examination.

b) In case of the candidates for Recruitment by Transfer, the qualifying marks are 40°/o, in the written examination for O.Cs and B.Cs, and 30°/o for SC/ST candidates.

After result of written examination is announced, qualified candidates in the ratio of 1: 3 of the available vacancies in the respective categories shall be called for Viva Voce.

No TA and DA will be paid to any of the candidates appearing for Screening Test/Written Examination/Viva Voce.

VII. APPLICATION AND OTHER INFORMATION:

The prescribed Form of Application, Hall Tickets in quadruplicate and the instructions and information to the candidates can be downloaded from the High Court Website http://hc.tap.nic.in from .16-08-2016 on (Full Scape) Photo Copy paper.

VIII. Applications along with necessary enclosures and a crossed Demand Draft for Rs.300/- (Rupees three hundred only)[ Rs.100/- (Rupees one hundred only in case of SC/ST candidates] towards examination fee, drawn on any Nationalized Bank in favour of the. Registrar (Recruitment), High Court of Judicature at Hyderabad, payable at Hyderabad, are to be submitted in the offices of the Principal District Judges of the concerned Districts, where the applicants reside; and the applicants residing in Hyderabad and Secunderabad, can submit the applications in the office of the Chief Judge, City Civil Court, Hyderabad; during the office hours, on any working day. Applications of the candidates belonging to other States can be submitted in the office of the nearest Principal District Court in the State of Telangana and the State of Andhra Pradesh or to the Registrar (Recruitment), High

Applicants belonging to SCs/STs, hailing from other States, have to pay Rs. 300/- instead of Rs. 100/- towards examination fee, unless the caste to which they belong, is recognized as Scheduled Caste or Scheduled Tribe, as the case may be, by the Governments of Telangana and Andhra Pradesh.

Screening Test if necessary and written examination will be held at the places to be specified by the High Court separately.

Mere selection does not confer any right on a candidate and his/her appointment shall be subject to verification of antecedents. 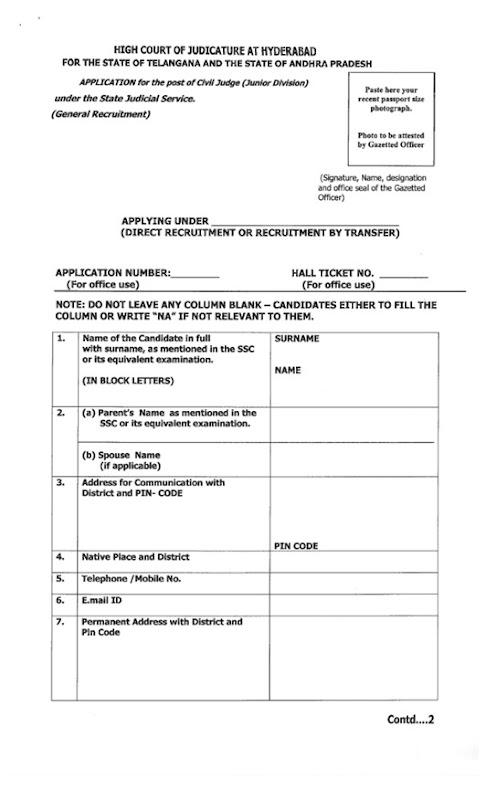 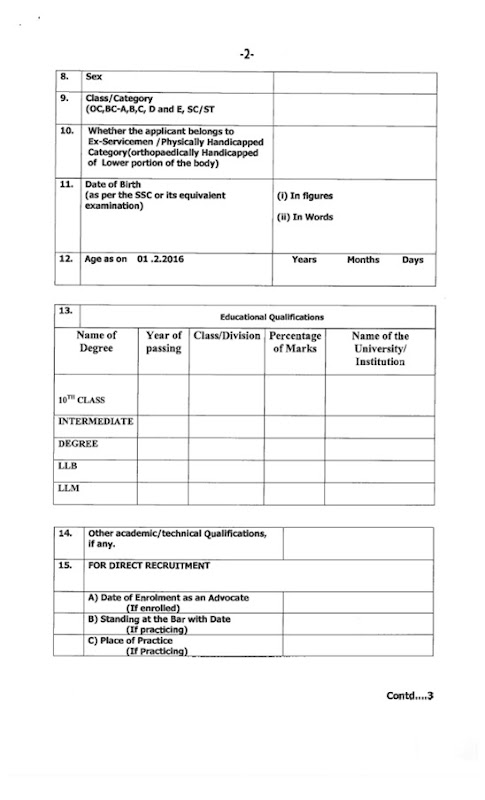 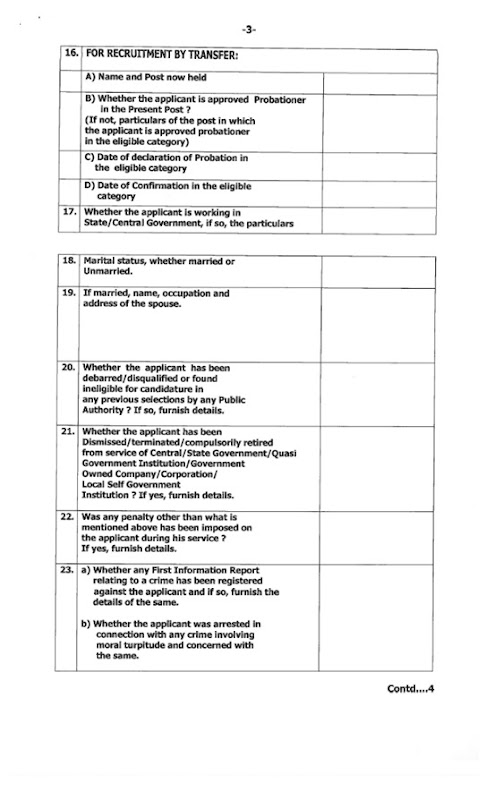 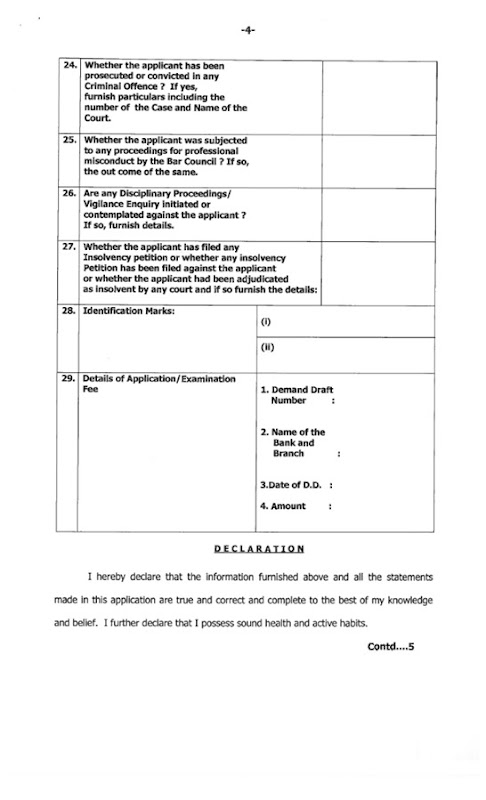 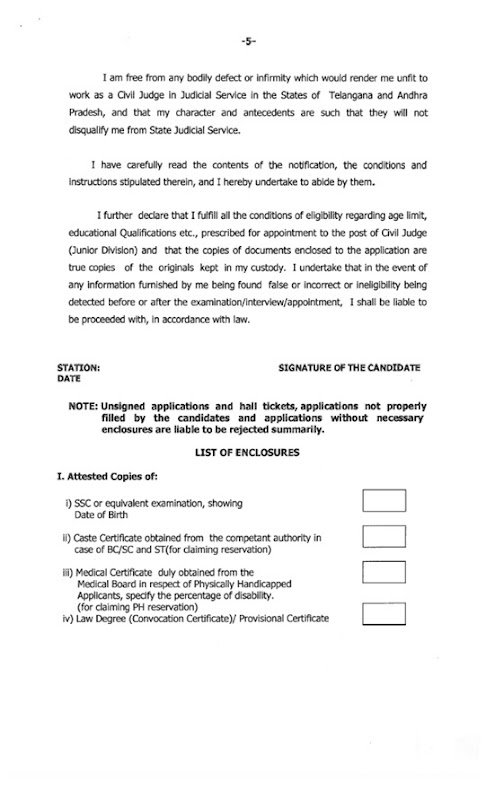 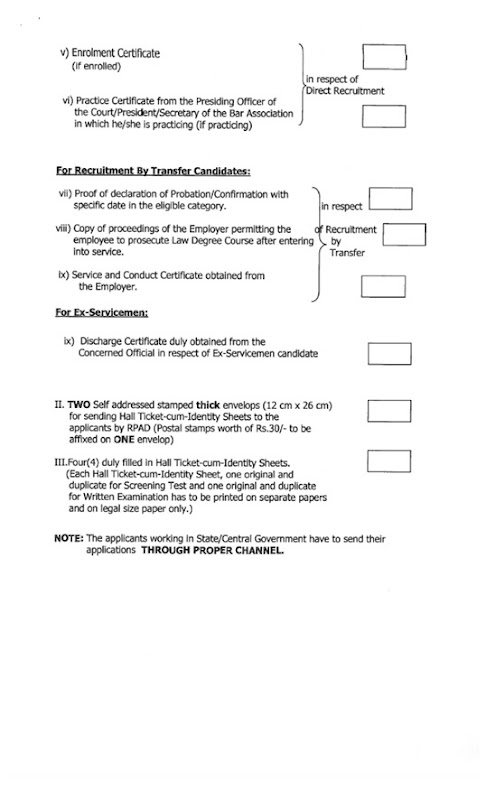 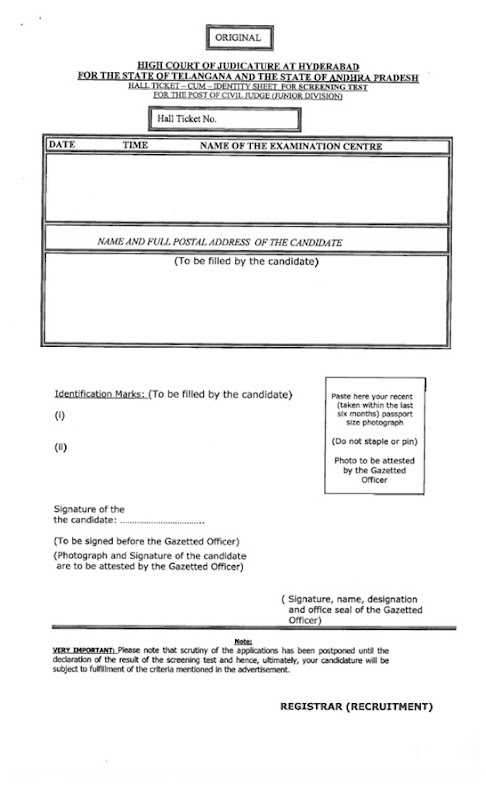 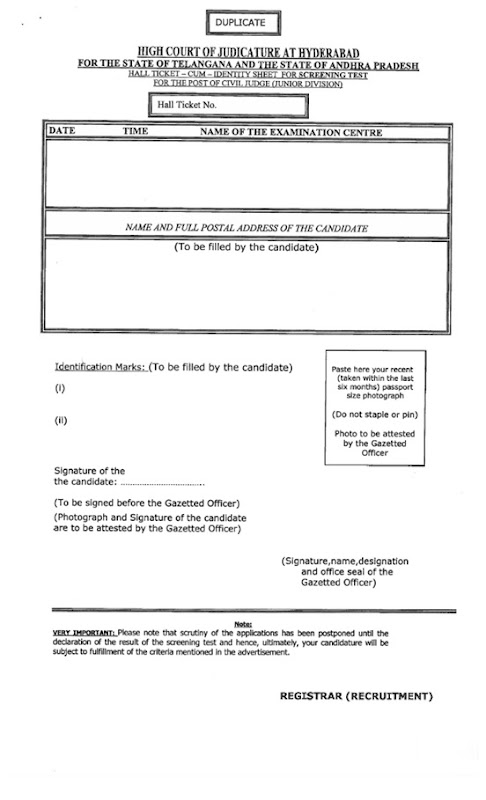 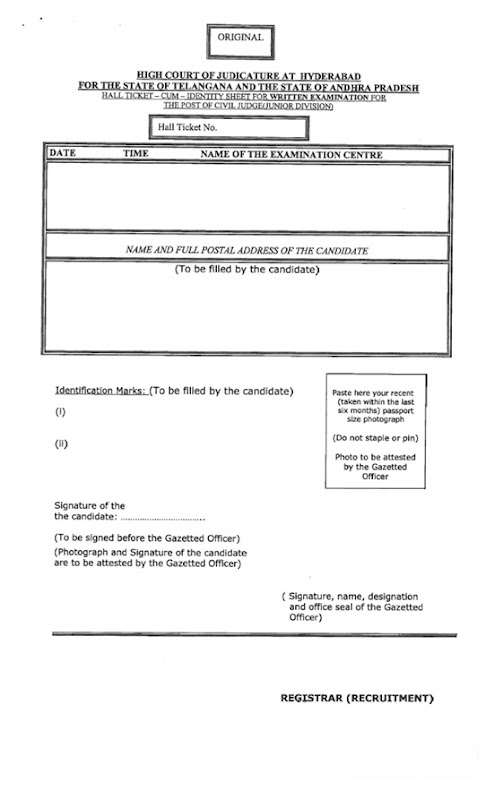 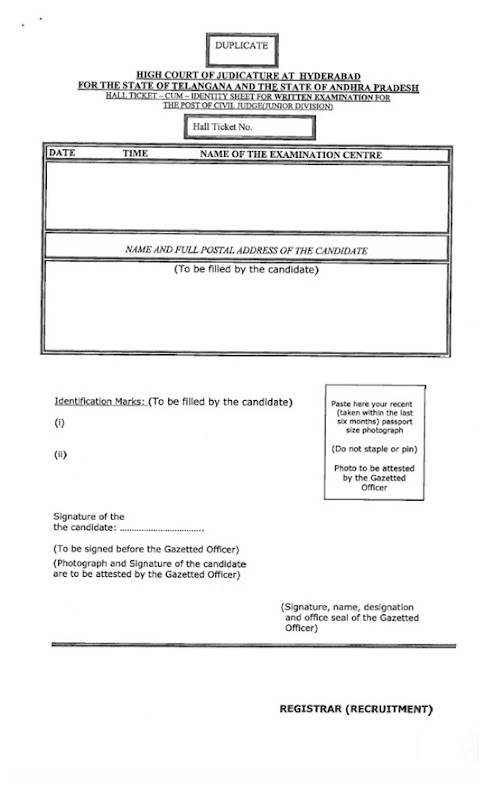